Shannon Sawyer
Shannon is in the world's of Three-Dog, 'Fighting the good fight' for Fallout 76. Despite public opinion, she loves the MMORPG Fallout world and knows just about all there is to know about the Fallout Universe as a whole. She's engaged with the lore right back to the Interplay days, and she's here on Wasteland Gamers to pass on that knowledge to you!

Radiation is the fun and exciting gift that keeps on giving in Fallout, and in Fallout 76, radiation comes with the bonus surprise gift of mutations in every box! But what if you want to keep your mutation, but you’re about to die from radiation?

Do you have to choose between life and thousands of caps? Lucky for you, the perk card featured in this Fallout 76 Starched Genes guide has a handy little ability to help you in the game.

Starched Genes is a mid-game Luck Perk Card unlocked at Level 30 with only 2 Ranks. The effects are as follows:

Mutations are a new mechanic to the Fallout franchise that shakes things up. They are effects that have positive and negative qualities and can only be obtained randomly by radiation or by consuming mutation serums. However, unlike the Traits of Fallout: New Vegas, just as you can obtain a mutation, you can also lose them.

Starched Genes might not be ideal for the player who does not have the means to afford mutations and depend on sheer luck of a random mutation, but where Starched Genes shines is in the late game.

When you have the mutations you want, you certainly don’t want to lose them. When I used a Radaway and lost my Marsupial Mutation out in the Cranberry Bog. It turns out it’s harder to navigate the minefield of trenches, and I forgot what it felt like not being able to jump as high.

The problem was that I didn’t have Starched Genes equipped, which at Rank 2 would have prevented my mad scramble back onto land while being attacked by a Scorchbeast.

Once you have the exact mutations you want, Starched Genes is a must-have for your loadout. Make sure to remove the Perk Card before you try removing a mutation that might not be right for you, or you’ll be down one Radaway and still have some wonky genetics kicking around in your code.

Why Do You Need Starched Genes?

The game is called Fallout for a reason. Small amounts of radiation can be negated with certain Perk Cards, such as the Legendary Perk, What Rads? This Perk Cards grants +300 Rad Resistance and restores six rads per second at Rank 4 (and one I just so happen to keep equipped). Perks that allow radiation to be recovered slowly over time do not cure mutations.

Even with this equipped, events such as Radiation Rumble or traversing nuked zones will eat your health down in less than a minute and kill you, so you will require Radaway from time to time. Unfortunately, Radaway is the number one way of losing a mutation.

The C.A.M.P. ally (an NPC who can live at your home) Solomon Hardy can also cure your radiation damage for a small cost; however, this does not distinguish between radiation and mutations and will also remove mutations from your character. You’ll be back to square one depending on sheer luck of radiation poisoning or getting your hands on a mutation serum. Serums are not exactly cheap to buy, and their recipes, as we know, cost an arm, leg, torso, etc. 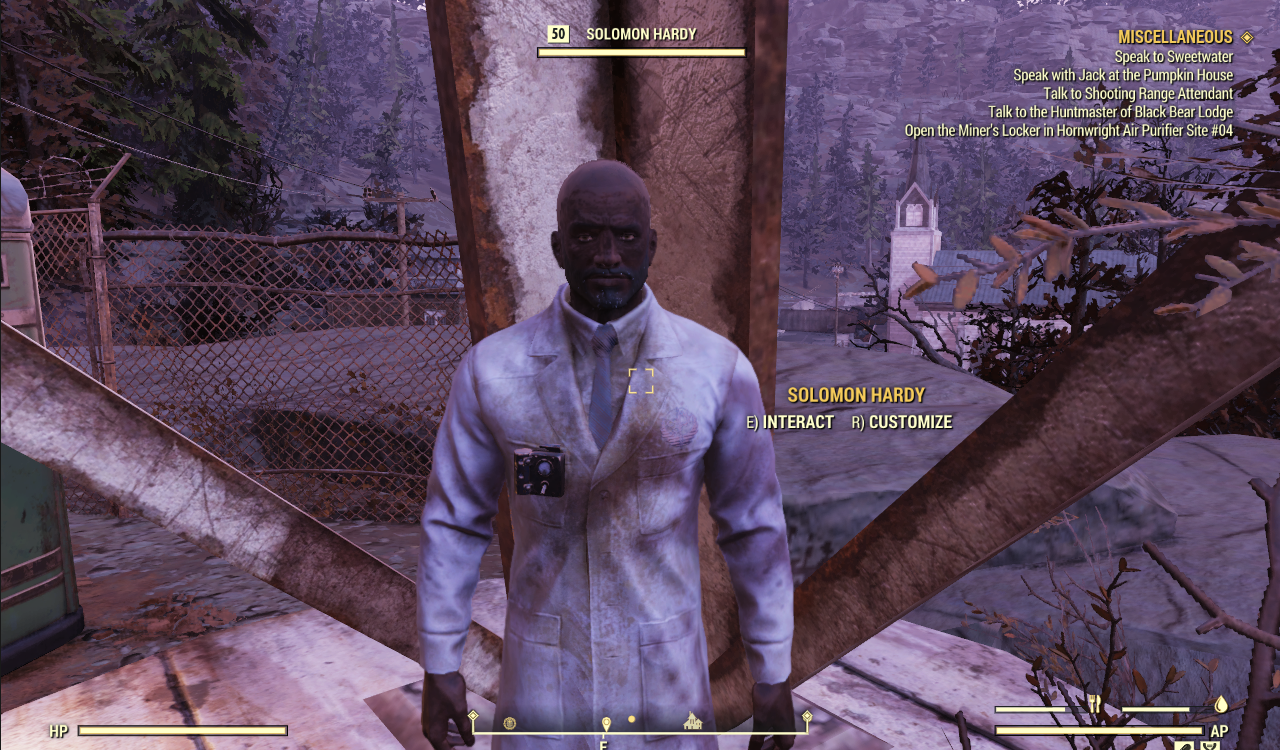 Exploring a player’s C.A.M.P. might not notice the weird foggy outline in a doorway. You might’ve seen one of these in the West Tek Research Center or the Emmet Mountain Disposal Site just before descending into the irradiated hell inside. This is a Decontamination Shower, a workshop item that, when active, removes radiation.

Players don’t usually place them in that way in some scheme to rid you of your precious mutations, as many players like the aesthetic of seamlessly blending incredibly useful items into their homes. That said, Decontamination Showers are just as dangerous as Radaway is for mutations.

If you’ve played Fallout 76 enough, you might notice some players have a strangely high amount of radiation that they don’t seem inclined to cure. The reason is that they are using a Bloodied Build, named after a Legendary Weapon Effect, a specific build that dances on the edge of death with items catered to dealing out damage the lower your health is.

Radiation is an excellent way to keep your health at a constant low, as it cannot regenerate beyond the existing radiation damage. But that means players need to monitor their radiation since it can kill them just as quickly as lost health and may require a Radaway from time to time, or they will fall dead when their radiation damage fills their tool.

Most of these players also use mutations (such as Adrenal Reaction, which grants the player increased weapon damage the lower their health) and they can use Starched Genes and radiation resistance abilities to maintain their effects. Though I’m not the type to gamble with my health bar, if a Bloody Build works for you, I won’t rock your boat.

Out of Luck? Go Legendary:

If you are late enough in-game to start working with mutations, you might find that you’re running out of S.P.E.C.I.A.L. points to distribute Perk Cards and flip through the infinite deck of Perk Cards you’ve accumulated. If you lack the Luck points to add Rank 2 of Starched Genes, there is a workaround.

Once you hit Level 50, Legendary Perks open up for you. Legendary Perks are a set of Perk Cards introduced in the One Wasteland for All update that is entirely separate from S.P.E.C.I.A.L. Perks and allows you to turn in some of those extra Perk Cards taking up space into Perk Points to buy these Legendary Perks.

In previous articles, we’ve seen these come up a few times, but there’s a particular Legendary Perk that can help in this situation, and it’s one of the more tame ones on the list that doesn’t make your enemies explode on death.

The effects of the Legendary Luck Perk Card are as follows:

Legendary Luck gives the player additional Luck and extra Luck Perk Points, meaning you can add more Perk Cards into the Luck slot if you have this card equipped, maxing out at 15. This will make the decision to equip Starched Genes a little easier on you if you have the breathing space in your abilities to add this Perk.

Question: What Other Perks Work Well With Starched Genes?

Answer: Class Freak reduces the drawbacks of mutations, and Stranger in Numbers increases the positive effects of mutations even further if other members of your team are mutated.

Question: What Mutations are Recommended?

Answer: Mutation choice comes down to personal preference, but I believe that Speed Demon for extra maneuverability, Marsupial for jump height, Chameleon for optional stealth fields, and Plague Walker for optional poison aura are good mutations to have in general.

Question: Is Starched Genes the Only Way to Keep A Mutation From Being Removed by Radaway?

Answer: As of writing this article, yes. No other perks, consumables, or items in the game can lock in your mutations.

Mutations in Fallout 76 are more easily lost than gained if you are not cautious about how much radiation you take on at any time. Starched Genes is a Perk that takes that burden off your mind so you can focus on watching that Geiger counter tick while shooting a Scorchbeast Queen out of the sky.