Xavier Geitz
Xavier is a featured writer for Wasteland gamers. His love affair with the Fallout series started in 2008 with Fallout 3 and hasn't slowed down since.RPGs are Xavier's video games of choice, and alongside Fallout, some of his favorites are Fire Emblem, Kingdom Hearts, Alpha Protocol, and The Elder Scrolls series. As talk of the Metaverse continues to heat up, Xavier faithfully waits for someone to create a real-life version of The World (Minus dungeon boss-induced comas).

Everybody who’s heard of Fallout knows about Power Armor. But when it comes to Fallout armor, there’s a bit of an unsung hero: Combat Armor.

Since the first game in the series, Combat Armor has been the premier mid-tier armor in Fallout. In Fallout 3, my favorite armor is by far Reilly’s Ranger battle armor, which is arguably the best non-Power Armor armor set in the game.

Like most armor sets in the Fallout series, Combat Armor in Fallout 4 is modular. Modular armor comes in six armor pieces:

You can modify these armor pieces with five different materials, with the higher tiers being a requirement to make your Combat Armor as durable as possible. With the right crafting components and perks, you can mod your armor pieces to make them stronger.

Along with improving your armor’s defensive capabilities by modding their material, you can mod each armor piece except the helmet with a miscellaneous mod to provide more utility. 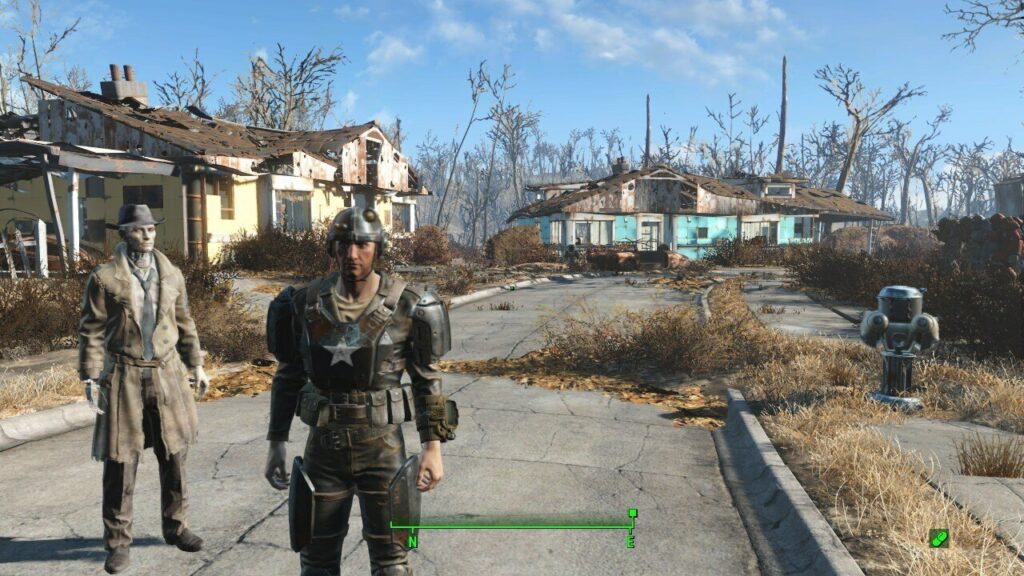 Each Combat Armor piece can be standard, sturdy, or heavy, except for the helmet. Combat Armor gets bulkier with each variant and covers up more of your body. Helmets got the short end of the stick in Fallout 4 and only have standard versions and have no mods (Excluding Power Armor helmets).

Most armor in Fallout 4 falls under the leveling system, and Combat Armor is no exception. Sturdy or heavy armor will be rare finds early on but common as you level up. 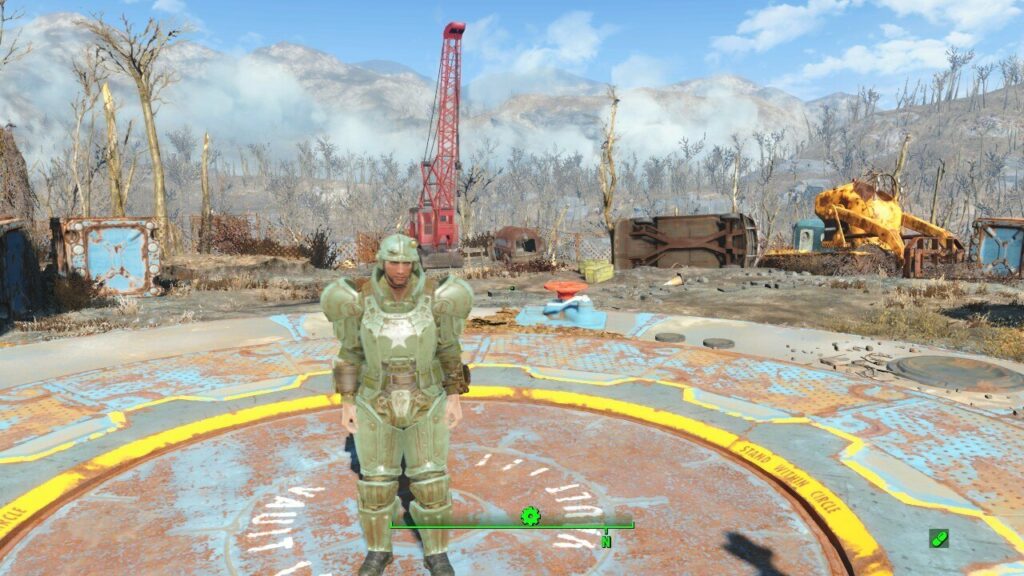 A few enemies can be sought out early in the game to get sturdy or heavy armor as quickly as possible. These fights are extremely tough, however, and not recommended. And in all honestly, you don’t need the highest tier of Combat Armor at level 10, anyway.

Before you get started with modding your Combat Armor, there are some things you’ll need

To have access to every Combat Armor-related mod, you need the following perks and perk ranks:

You only need Armorer Rank 2 to access the highest tier of material mods. As for miscellaneous mods, arguably the best pure defensive mod, the Asbestos Lining, only requires Armorer rank 1. Most additional utility mods require higher perk ranks, but it doesn’t take long to make your Combat Armor as tanky as possible.

Fallout 4 is a borderline junk collector simulator (Though junk is a huge misnomer for crafting materials, seeing as how the stuff is vital), and you need big stacks of crafting components to improve your loadout.

Here are the crafting components necessary for Combat Armor mods:

One of the worst mistakes players can unintentionally make in the early game of Fallout 4 is ignoring all the Leather Armor drops they come across.

And don’t get me wrong; it’s an easy mistake to make. I made it myself on my first playthrough. After all, it doesn’t take long for you to find armor that completely outclasses Leather Armor.

Leather Armor pieces have terrible weight-to-value ratios, and in the early game, you want to make as many caps as possible. So, leave those leather left arms for the mole rats, am I right? Wrong. 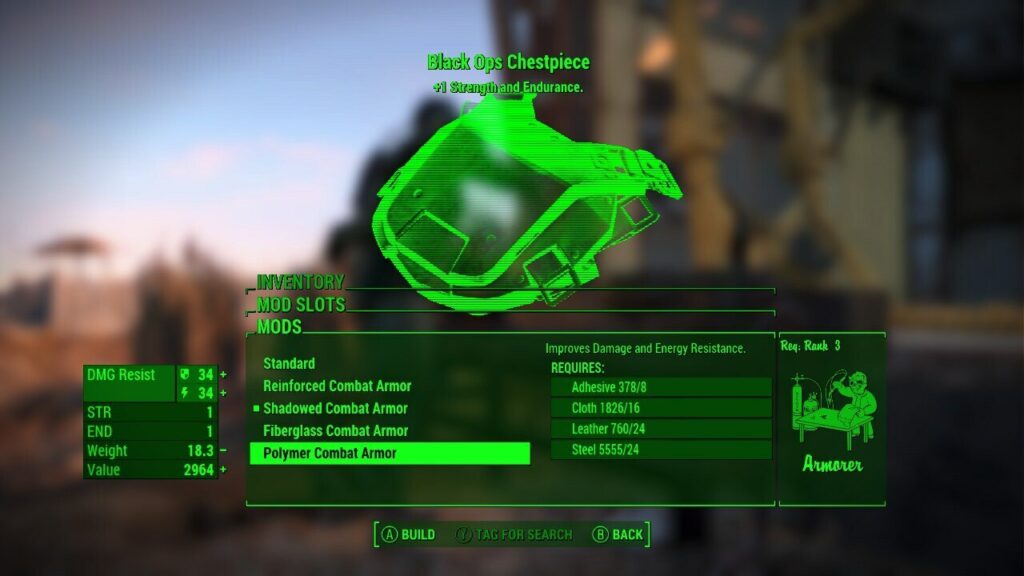 So, instead of ignoring all those Leather Armor drops, pick up the first rank of the Scrapper perk and scrap all the Leather Armor you see. It pays off big in the long run.

What are the best Combat Armor mods in Fallout 4?

The answer to this question is tricky, as it all depends on how you play Fallout 4.

Take the material mods, for instance. The Polymer Combat Armor is the strongest defensively. It seems like the obvious choice, right? But if you’re a stealthy Sole Survivor like me, you might prefer the tier 3 material Shadowed Combat Armor.

It has inferior damage and energy resistance but improves stealth in dark areas. I try to get hit as little as possible, so for me, more stealth is better than more defense.

Stat-wise, the best torso mod is Asbestos Lining. It provides an additional 15 energy resistance and makes you immune to being set on fire. Daenerys Targaryen would approve of this mod. Applying this mod doesn’t give you three dragons, though. 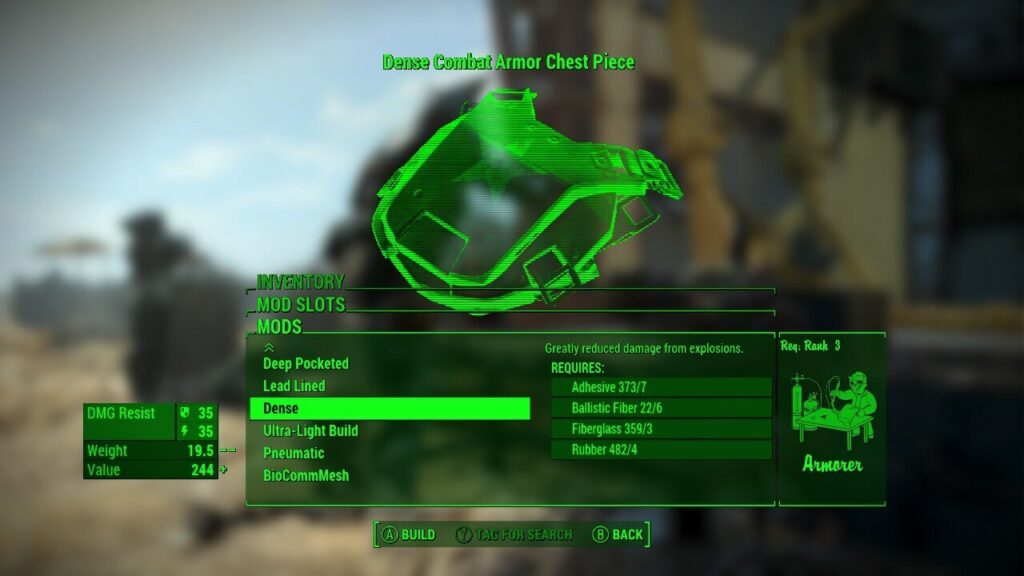 The BioCommMesh increases chem duration by 50% and is the best torso mod for Junkie builds. Dense gives good additional protection against explosions.

Leg mods are great for stealthy characters. Some can make you move faster while sneaking or reduce your chance of detection while moving around. 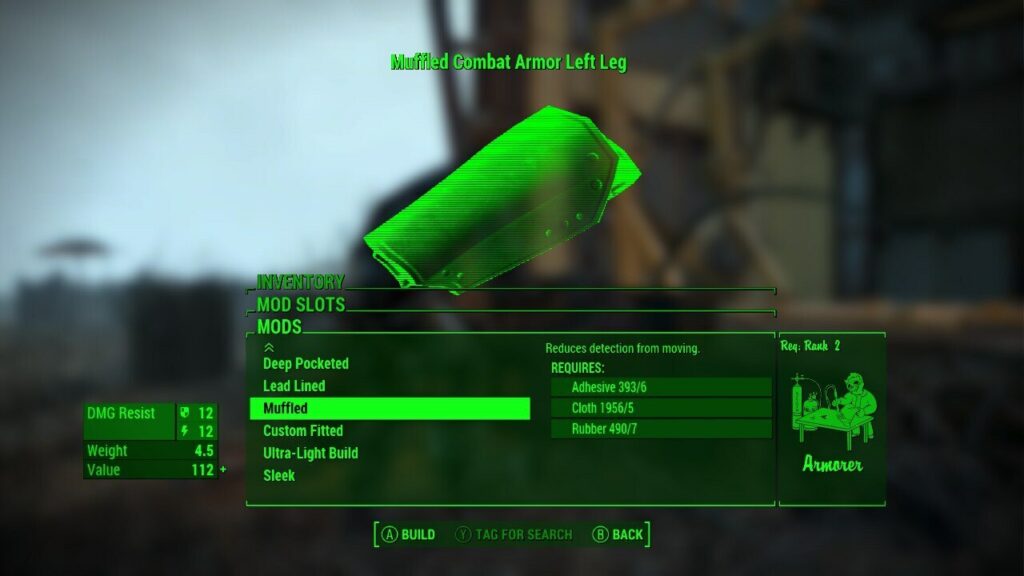 If you’re a V.A.T.S. heavy character, apply the Ultra-Light Build to every armor piece for the bonuses to your Action Points. Deep Pocketed is best for those wanting to haul more loot back home.

There is a total of six unique Combat Armor sets in Fallout 4. You can purchase four of them from vendors, obtain one as loot in the wasteland, and one as a quest reward. These are:

I call them sets, but in actuality, none of them are. There isn’t a single complete set of unique Combat Armor in the game.

It is possible to have a complete set of unique heavy Combat Armor by mixing and matching the pieces.

How Strong is Combat Armor?

Not including modifications, these are the maximum base damage and energy resistance stats for the three variants of Combat Armor:

Things are more even when you get around to heavy variants, but standard Combat Armor is a significant step up from other standard armor at that level like leather, metal, and robot armor.

Is Combat Armor the Strongest Modular Armor in Fallout 4?

Yes, but also no.

Heavy Combat Armor is the most balanced modular armor in the base game Fallout 4. It has less damage resistance than heavy robot and metal armor but higher energy resistance.

It has lower energy resistance than heavy Synth armor but higher damage resistance. Heavy Combat Armor is also easier to come across than the other armor options, so it has availability going for it, as well. Heavy Combat Armor with ballistic weave underclothing and headwear is the most accessible and strongest midgame loadout.

But that’s all just in the base game. If you have Far Harbor installed, then yes, Combat Armor is the best modular armor in the game. 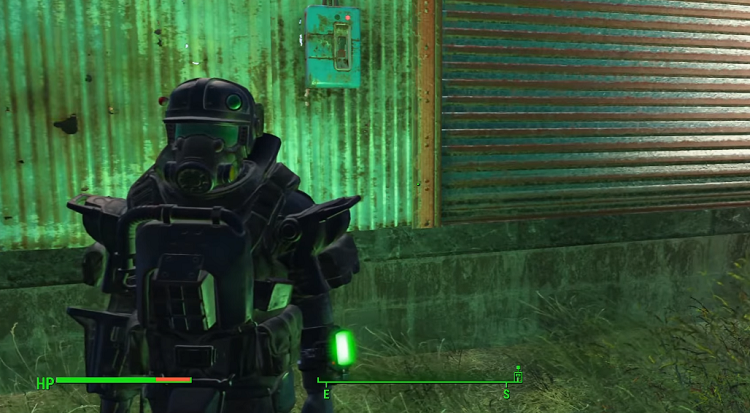 Marine Armor is an advanced version of Combat Armor used by United States Marines in the Great War. Not only are the base stats of the Marine Armor way higher than the rest (159 damage and energy resistance), but it also offers radiation resistance. It is the second strongest armor in the game, with only Power Armor surpassing it.

To mod Marine Armor, you will need Armorer Rank 4 and Science! Rank 4.

Where Can I Get a Set of Combat Armor Early in the Game?

The best way to get a set of Combat Armor early in the game is to go treasure hunting in Jamaica Plains. No, I didn’t intend for that to rhyme.

Jamaica Plains is a moderate jog southeast of Diamond City. There are some dangers along the way, especially at a low level, but you can easily avoid them. 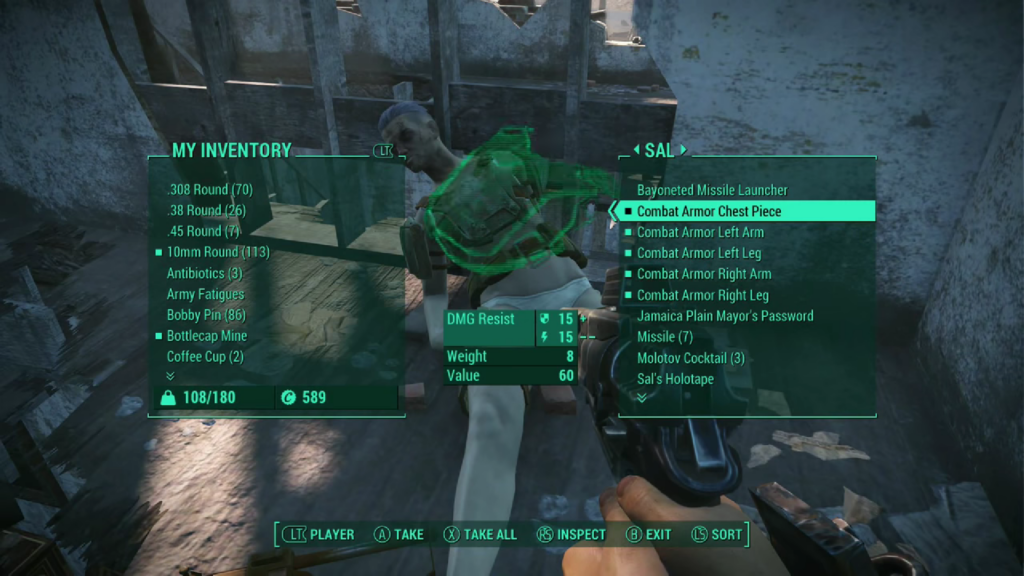 Once you get there, be careful. Jamaica Plains is residence to a bunch of feral ghouls. Make your way through Jamaica Plains until you reach the Town Hall. Head upstairs and go into the room on your left at the end of the hall. Behind a desk is a dead Gunner by the name of Sal. She’s got everything but a combat helmet. You’ve got yourself some new armor.

Question: Do the Gunners Have their Own Combat Armor?

Answer: Strangely enough, no. Despite essentially being Fallout 4’s version of Talon Company, they do not have their own faction Combat Armor. They walk around in flannel shirts instead.

Question: Is it Worth it to Buy Combat Armor Upgrades from Vendors?

Answer: In my opinion, no. Even sturdy armor pieces can cost a fair bit, even with every rank of Caps Collector and multiple copies of Tales of a Junktown Jerky Vendor.

Question: Are the Unique Pieces of Combat Armor Worth Buying?

Answer: Some of them are. The Destroyer’s armor is great for lower-level players and not too expensive. The Overseer’s armor will set you back over 12,000 caps. And that’s just for the armguards.

All in all, I’m pretty satisfied with how Combat Armor is in Fallout 4. I’m still scratching my head over why the Gunners don’t have their own set, but I suppose you can’t get everything you want. And while Marine Armor isn’t traditional Combat Armor, it’s close enough.

I definitely thought the new Synth armor would be the top dog in the game, but Bethesda went a different route. And thank goodness for that, since Marine Armor looks a heck of a lot cooler than pieces of Synth armor.

Is Combat Armor your favorite in Fallout 4 too? Let me know! I’ll see you out in the Commonwealth.