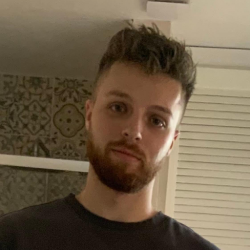 Linden Garcia
Beginning his writing career at Veryali Gaming, Linden has been around in the world of gaming content creation for a while, and through the practice of following his passions, he has landed here on Wasteland Gamers. Linden is a huge admirer of Bethesda's work, loves the Fallout series, and loves nothing more than debating whether Fallout 3, Fallout NV or Fallout 4 is the best. Outside of this, Linden is a personal trainer and loves keeping up with his fitness regime!

Fallout presents the player with a bleak, dilapidated setting, but boy, does the series have some of the most incredible artwork I’ve seen in any franchise! And what better way to show your love for that style than to wear it?

In this list, I’m going to go through the top 10 best Fallout themed shirts that I’ve found on the web.

In this list, I’ve presented a broad array of different designs of shirts, coving a rich catalog of art. If you’re buying for yourself, you’ll no doubt have a good idea of what level of Fallout fandom you’re both familiar and comfortable with — but choosing a gift can be difficult.

As such, here are my ultimate recommendations for both the average Fallout fan and those more intimately familiar with the game’s deep lore and lesser-known idiosyncrasies.

For the average Fallout fan: For people familiar with Fallout’s world but not so much with the lore, I’d recommend number 1. This shirt encompasses the most familiar in-game brand from the series, its instantly recognizable mascot, and a little bit of classic Fallout humor to boot.

For the super fan: For fans that are intimately familiar with the series, its history, and its lore, number 7 would be my pick. With the entirety of the material peppered with the lesser appreciated icon artwork from the games, this shirt is a stylish tribute to the details.

My Picks at a Glance 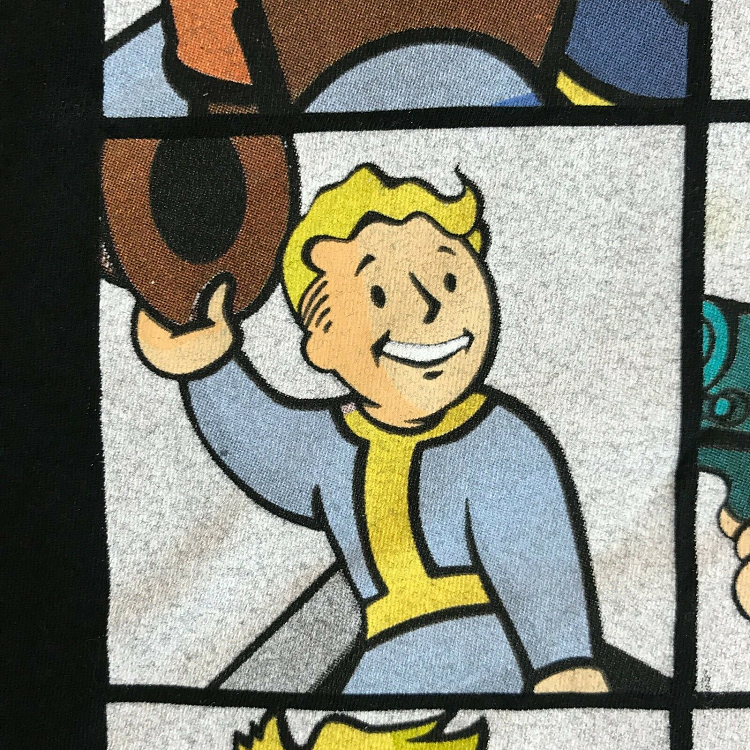 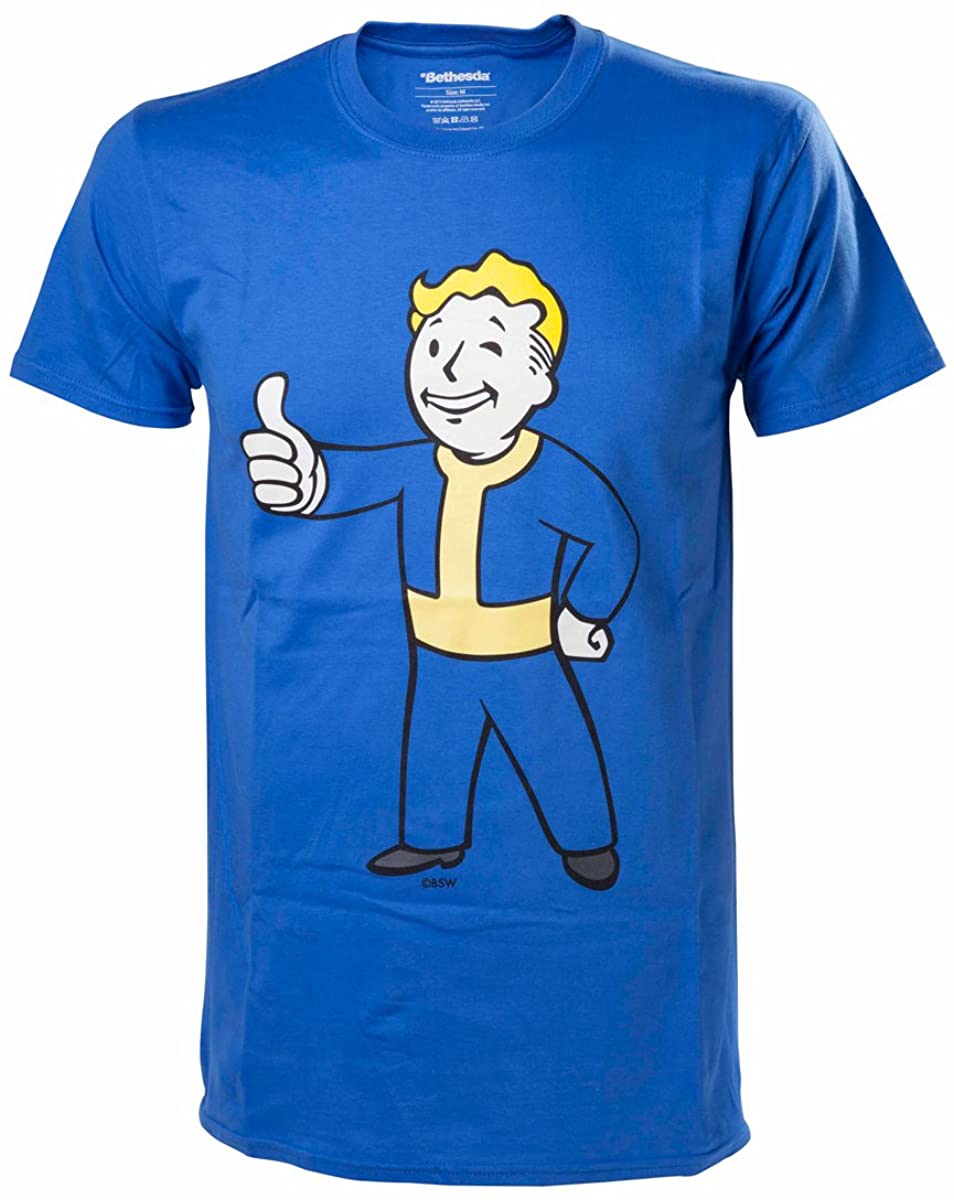 T-Shirts or Button downs only: There’s a ton of awesome Fallout-themed appeal out there hoodies, dresses, and even suits! But for this list, I decided to narrow it down to just T-shirts and button-downs the most commonly bought graphic-based apparel.

Purchasable content only: During my search, there were several popular designs that came from expos and special events, but, realistically, if I’m recommending clothing, I want you to be able to buy that stuff for yourself. As such, this list will only feature shirts you can actually purchase. 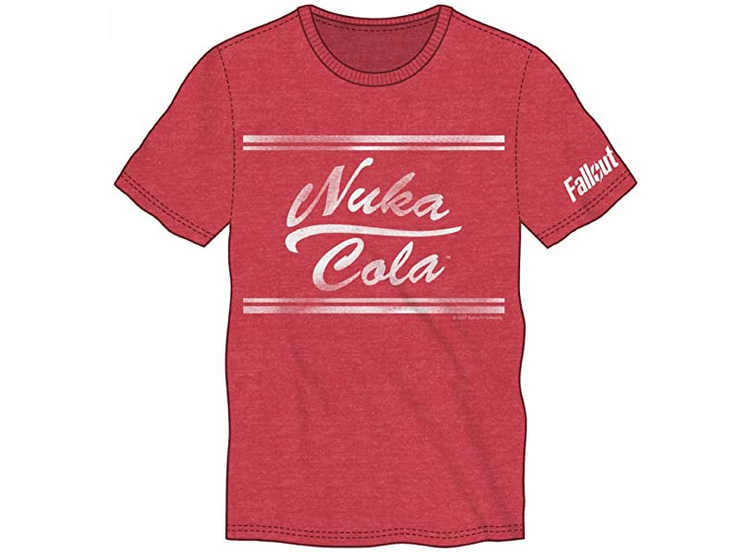 Unsurprisingly, there’s a metric ton of Nuka-Cola designs out there, but having sifted through dozens of them, this one stood out as the coolest.

Looking at the fabric, the garment looks to be of high quality, and this is confirmed in the plethora of positive reviews. Many Nuka-Cola designs simply opted for the classic, faded logo, but I love how this design manages to incorporate Vault Boy into the background beneath popping crisp typography.

Where I felt many did not, this particular design strikes a great balance between being bold yet understated; it’s stylish enough to not come over as overt fandom while still hat-tipping the beloved series. 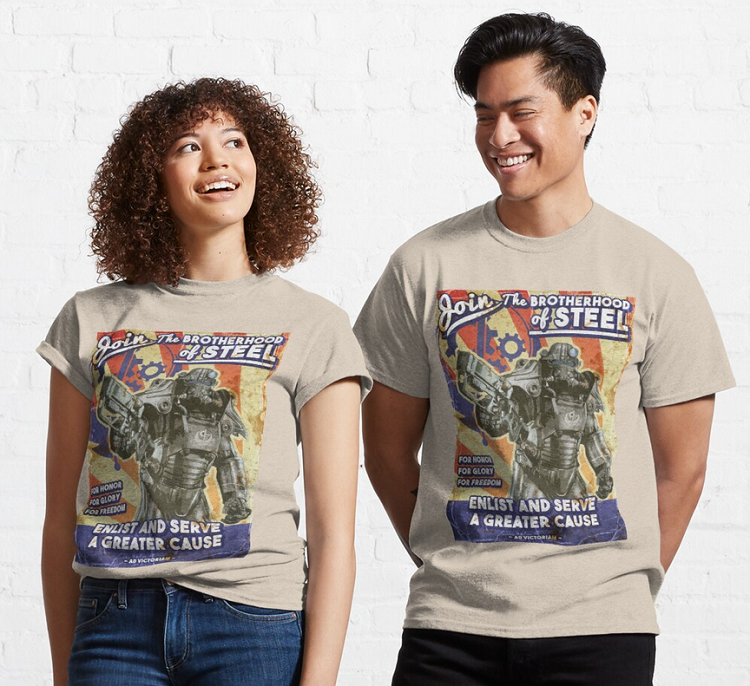 I’m usually not the biggest fan of poster-style shirts, but this one was a clear exception.

This shirt depicts a detailed, authentically weathered pre-war propaganda poster promoting the series’ infamous Brotherhood of Steel faction. The Brotherhood power armor is one of the most distinctive and iconic images from the series, and the artwork on display here is stunning.

Where many shirts of the same type can be a little loud, so to speak, the muted color pallet and essentialized aesthetic on offer here make for a modest work.

The shirt also comes in a wide variety of colors, and each compliments the graphic perfectly. With its striking imagery, it’s one of those shirts that will no doubt prompt some questions from those unfamiliar with the series. 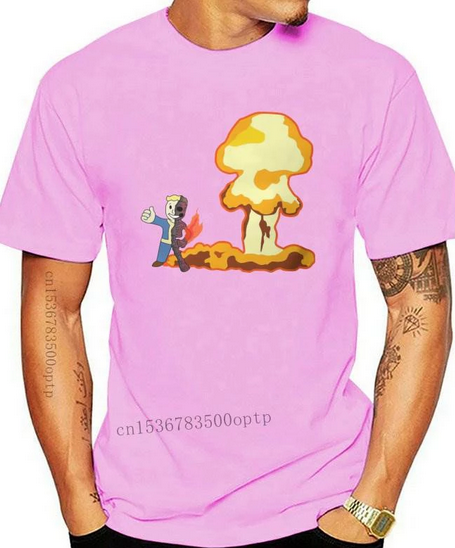 To me, this shirt is perfectly emblematic of the tone of the series: a strange amalgamation of 1950’s cartoons and black comedy.

There’s a lot of Vault Boy-inspired apparel out there, but not many that feature him as a half-nuked and somehow still standing (and grinning). Instantly recognizable to any fallout fan but interestingly macabre enough to garner a reaction from those unfamiliar, this is an excellent addition to your wardrobe.

It’s a juxtaposition everywhere you look, which is perhaps most evident from the bright pink background. 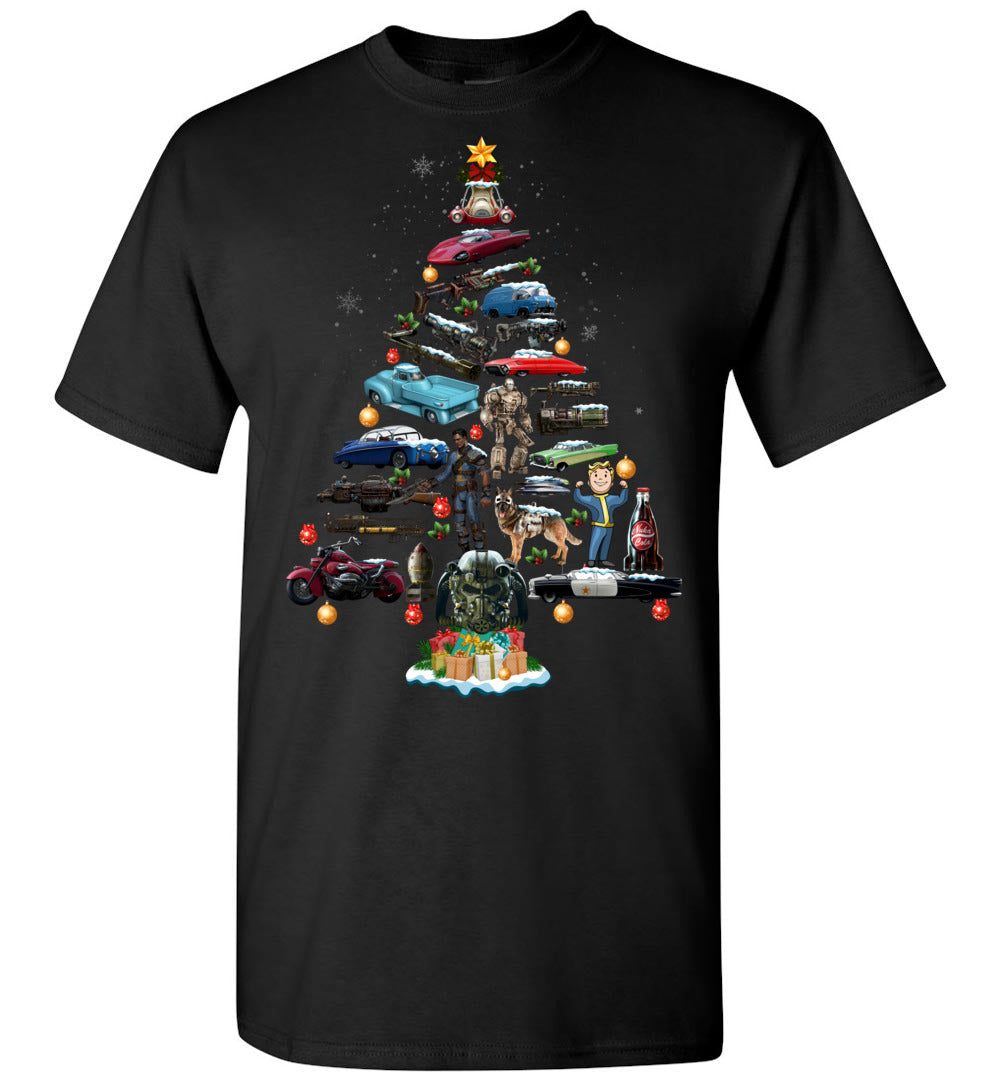 Gaming-themed festive clothing was never a thing before, yet, seemingly out of nowhere, now it’s everywhere. From Sonic to Sony, every brand seems to have had the Christmas treatment.

But I think Fallout takes the biscuit so far as festive gaming attire goes evidenced in this post-apocalyptic Christmas tree T-Shirt.

The Christmas tree shape has been fashioned into all sorts over the years, but this is assuredly the first time we’ve seen the structural format of retro-futuristic cars.

I’ve always thought the vehicles in Fallout are an underrated piece of design a cool mishmash between 1950s Chevrolet and Chrysler models and the work of H. G. Wells.

Barely any clothing designs feature them, and you’ve even got Optimus Prime the Brotherhood of Steel’s towering battle robot smack bang in the middle. What more could anyone want from their Christmas clothing, really? 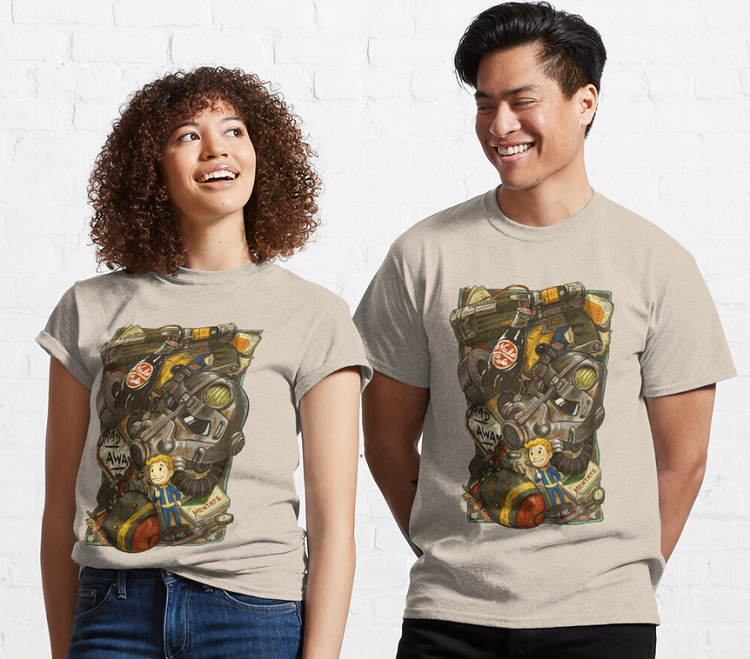 I love this bits-and-pieces style shirt from Red Bubble. One of the things I like most about the Fallout Series is the way it meticulously built a decaying world from the past, saturated in the somehow now eerie grain of the 1950s atomic revolution and the artwork on this shirt hits upon that feel perfectly.

Presenting as a depiction of a jumble of familiar items from the scourging induced romp that is every game in the series, each item has this appealing, cartoon-like quality to it that works so well with the theme.

I also like the lack of any form of text the shirt stands out on its own without the need for any ascription, and it’ll be interesting to both fans and non-fans alike.

Many Faces of Vault Boy Shirt 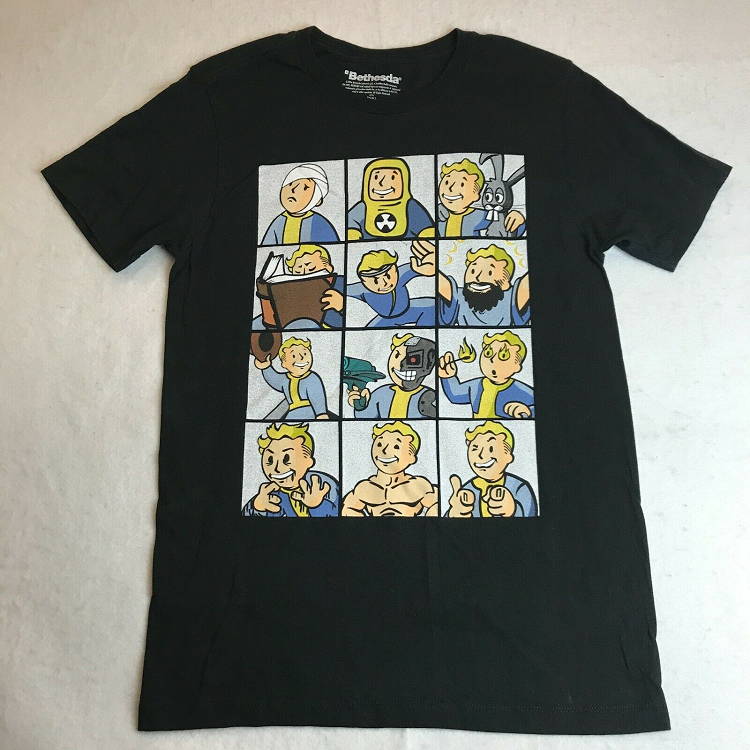 For me, one of the coolest aspects of Fallout is the juxtaposition between serious and light-hearted tones, and, as we’ve already deduced, Vault Boy is at the center of that.

In what is an indisputably grim series, it’s always a joy to see Vault Boy’s face pop up in a menu or in one of the excellently put-together tutorial reels, and I was always impressed with how much expression they managed to convey through this admittedly very simple character.

As fans of the game will recall, the images in this shirt come from the perks screen whereby vault boy often gruesomely acts out the functioning of whichever perk is currently selected.

These pictures and animations always made me laugh, and I’d be doing the same every time I looked in the mirror if I wore this (probably looking as crazy as he does as I did). 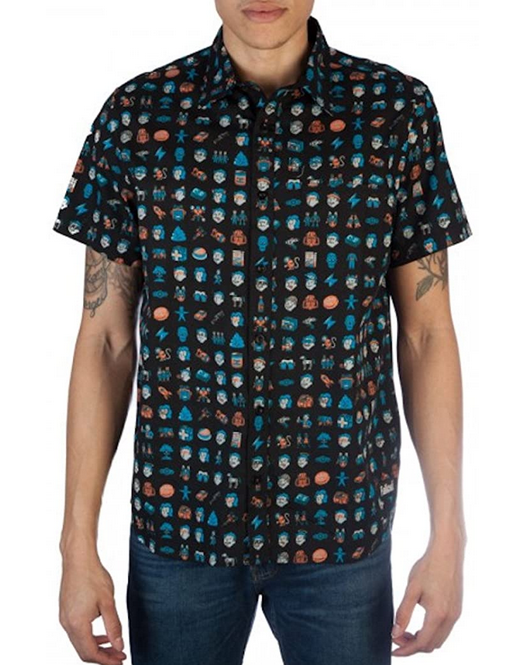 I’ve provided the zoomed-in image option for this shirt, but viewing the link above will bring you to a particularly unique button-down shirt.

I haven’t seen anything like this: it’s a gridded array of familiar icons that have been rendered in an especially effective blue, red, and white color pallet.

Again, this piece is evocative of that all-important humorous element the series is known for, featuring the many faces of Vault Boy (and this time, vault girl), as well some classic items from the game, such as stimpaks, the pip-boy, and, of course, the mini-nuke.

There aren’t many Fallout-style button-down shirts on the market, so this is a smart choice for those wanting to add a little pop to a more formal style. 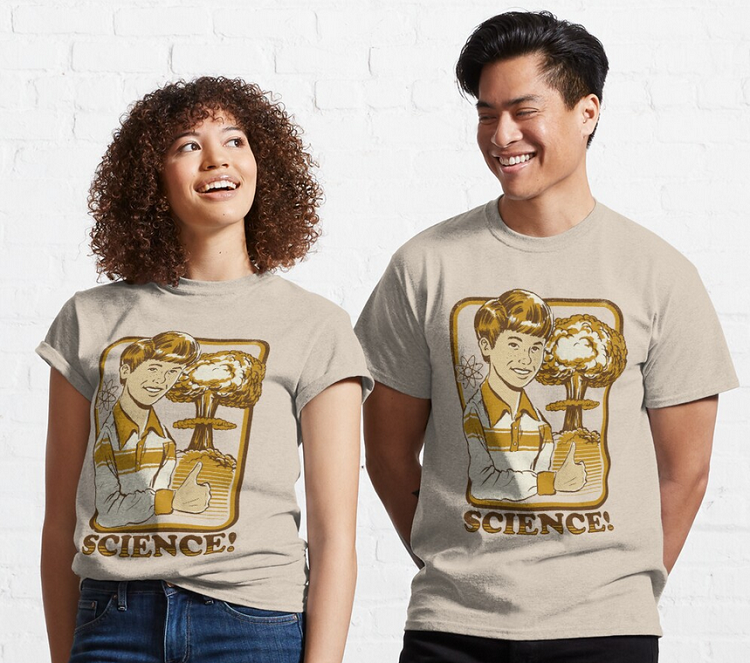 As you can see, I’ve chosen a fair few shirts on the basis of how they capture the spirit of Fallout but I think this might be the ultimate in that regard.

Vault Boy’s replacement for a more realistic-looking kid echo the same sentiment of the classic “thumbs up” pose, but given the guy’s expression, it’s somehow all the funnier. It’s a hilarious chastising of atomic power that only the most avid Fallout fan would guess as relating to the series.

As such, it’s in the unique position of being able to stand on its own irrespective of the franchise it’s part of, and I guess that’s one of the cool things about Fallout: its black comedy is instinctively funny even if you know nothing about the games. That’s one of the reasons why the series makes for great shirts! 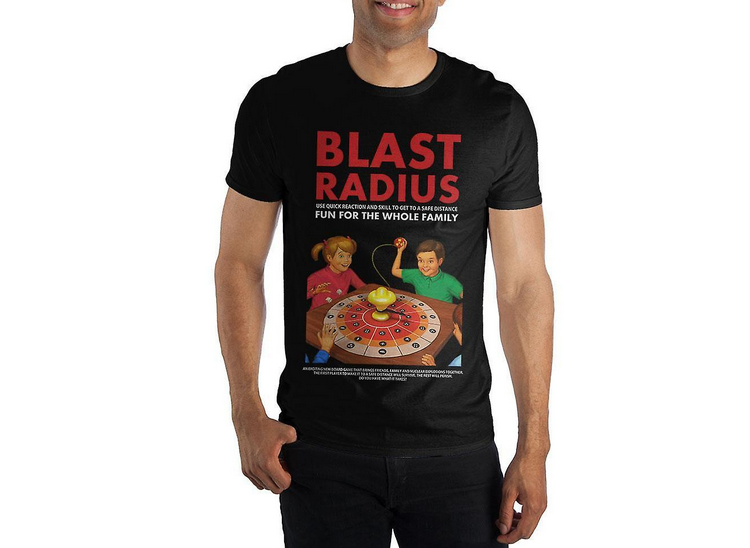 Another thing we all recall whilst traversing the wasteland is the decaying billboards that are scattered about. Most of them present a pre-war family demonstrating the supposed pre-war perks of middle-class America in a nuclear world and they were always hauntingly funny.

Fallout does a great job of highlighting the idiocy of mutually assured destruction by taking the mundanity of family life and injecting it with atomic power and the idea of a family playing a trivial pursuit style board game where the loser experiences the brunt of a mushroom cloud is a classically creative way to get this across.

Again, the beauty about apparel with these sorts of designs is that they don’t even look like they’re from the Fallout universe more of a clever social and political statement. 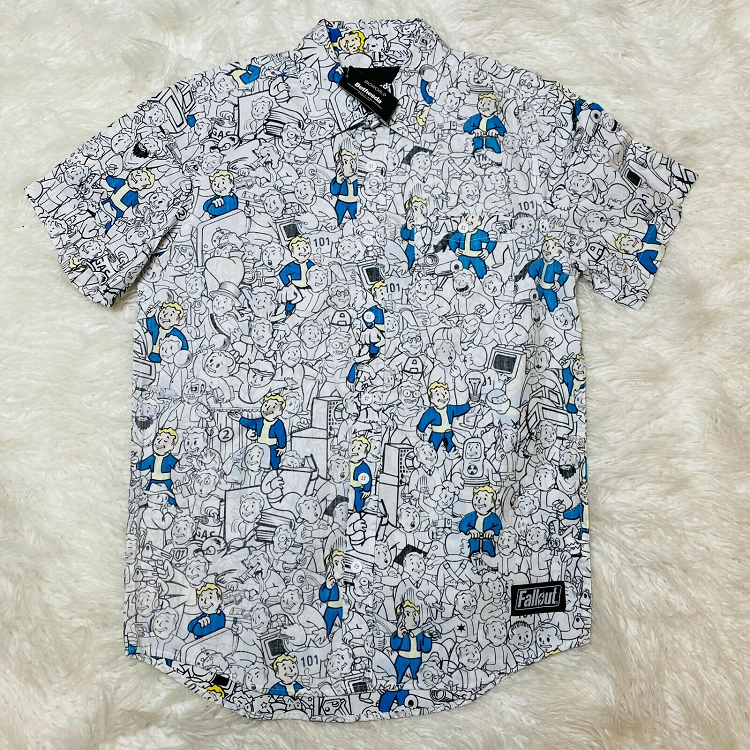 My last pick is this official button-down featuring Vault Boy. It’s an official product that pops up on eBay a lot.

Not unlike a couple of the other picks, this design showcases the many expressions, outfits, and aliases of our favorite post-American mascot.

They’ve managed to pack every one of his illustrative poses into this shirt in what can best be described as a more sinister version of a page in a Where’s Wally? book.

I particularly like how the design offsets Vault boy’s crazy antics with solid colored denotations of supposed mental normality; in the same way, the game presents this Jekyll and Hyde personality of the character, so does the shirt cheesy corporate fakery on the one hand, and total insanity on the other.

Question: My Friend/family Member is a Fallout Fan, and there are a Lot of Different Designs on this List. What would be the Safest to go with?

Answer: If you’re looking for something instantly recognizable as being from the Fallout series, I’d definitely go with something featuring Vault Boy — the receiver is sure to appreciate anything featuring this character.

Question: I Really Like the Poster-style Designs and would Like to Buy One for my Friend and Family Member, but would these be Too Obscure a Choice?

Answer: If you’re going to go for one of the more obscure designs, it’s best to be sure how intimately familiar your friend or family member is with the series.

Do they talk about the series nonstop and have a ton of memorabilia and Fallout-themed clothing already? These people will assuredly be the best candidate for one of the poster-style shirts!

Question: Are All of these Shirts Unisex?

Answer: With the exception of the two button-up shirts, all the items on this list are unisex. ‘Men’s’ or ‘Straight cut’ shirts fit both sexes. It’s also worth noting women often wear men’s button-up shirts open whilst wearing a t-shirt underneath, so that’s something to consider.

Hopefully, this list has given you everything you need to spice up your wardrobe with some stylish, post-apocalyptic clothing. Or, perhaps, you’re looking to buy a gift for an avid fan of the series. Either way, there’s no shortage of brilliant designs to pick from here.

Thanks for reading, and see you next time!